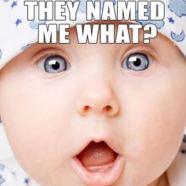 Names that shape us [names: part 3]

Posted by Culture Decanted on May 27, 2014 in Identity, Language, psychology, semiotics | 7 Comments

People’s fates are simplified by their names.

The preceding discussion, I was looking at the mythical and historical power in naming things. There is another aspect to this discussion is the power our names have over our actions: consciously and subconsciously.

“…(there is) the sometimes quite grotesque coincidence between a man’s name and his peculiarities”.

From the ancient world to today, many have noticed that some individual’s names appear to have a strange alignment with their chosen occupations in life. I’ve known a John Wade who is a plumber; I visited a Dr Death at a local medical centre (pronounced Deeth), and it’s somewhat personally amusing that Marc Webb is the director of the Spiderman 2014 trilogy reboot. It sometimes appears to be cosmically ordained; recently, Anthony Weiner, U.S. Congressman, was embarrassed in a sex-scandal by a ‘selfie’ of his underpants. There are many examples recorded all over the net of these occurrences.

An early psychological study of this phenomenon was conducted by Lawrence Casler (1975) called ‘Put the Blame on Name’. He collated an impressive pre-internet list of examples of people in careers that sound like their names and suggested in a loose conclusion, that in some way, environmental influences, lady luck and genes could be involved.

Since then, this phenomenon has been called the more definitive nominative determinism: that a person’s name can influence their chosen career or character. This was coined by John Hoyland in the New Scientist in 1994 .

A study by Keany, et al (2013) for the British Medical Journal, looked at this phenomenon in more detail and found reason to be alert to this.  They conclude:

We have shown that the influence of a person’s name not only affects their professional career or how others may treat them, but can also extend to determining aspects of their health. Further research could include investigating increased rates of obesity in the Fatt family or depression in people whose surname is Lowe. We believe that this finding could have an important role in public health medicine, and screening programmes that are name specific could be developed for families at risk.

They cite the examples in support of nominative determinism that Usain Bolt rain the 100m in the 2012 Olympics and is the fastest man; and the harder to explain coincidences such as Weedon and Splatt’s paper on the urethral syndrome in the British Journal of Urology. One would suspect to get peer-review published this was more than a chance to have a prank.

There is also room to think about what the connotations and associations of meaning are creating by way of connections based on our names. In an earlier post,  I cited the example of the animated 1943 Film, Red Hot Riding Hood, which was an important inspiration for creator Gary Wolf’s Jessica Rabbit.  He had seen the film as a young man and would have identified with the male role of the Wolf, leaving him with powerful memories of his own lady-in-red for when the opportunity arrived to create his own lady in red.

There have been more literary observations of these similarities, instead of our parents being the namers of our destinies, authors guide our reading of characters.  Described as aptronyms; charactonyms are used to describe the similar effect in literature. Mervyn Peake, author of Gormenghast, was a great practitioner of these, calling the Castle Doctor Prunesquallor and protagonist Steerpike. Perhaps more overt forms of this are the tales of Asterix and Obelix with other characters like Vitalstatistix and Getafix.  We can also see these charactonyms on TV.  On the long running TV show CSI, the lead character is called Gil Grissom.  Grissom is surname related to Grice and Gris – which is French for the colour grey.  On the show it is pronounced ‘gris + homme’, which means translates to grey-man.  A greyman is term used to describe people who work in murder or death and that have the ability to blend into a situation.

I suppose that we shall have to watch and ponder at the recent trends of strange names given to Celebrity-offspring and observe what affect this naming has on their children. Nicolas Cage called his son Kal-El after Superman; Gwyneth Paltrow’s daughter is called Apple; Bono’s daughter is Memphis Eve, and Forest Whitaker’s child, Ocean, to name a few. It will be interesting to see as Lawrence Casler in 1975 asked, will they put the blame on the name. If there is one way to test a theory, it’s to see how and if it shapes these children over time.